skip to main | skip to sidebar

Our last day. We are up just after 8am. Weather, the usual. Sounds like you are having something similar at the moment. That'll be nice and cool for us when we get back!

Mission this morning was to go to Walgreen's. Couldn't have the offices going without their sweets, eh? Got a bit of breakfast, then back to the room to pack up.

All packed we checked out. Bit of a query with the bill. They wanted to charge $67 resort fee, to cover dressing gowns, papers, etc. This had been introduced after we booked last year, so that came off the bill.

Cases were left with the bell boys whilst we spent our last day on The Strip.

We headed over to the Flamingo. They have a tropical garden there, with, yes you guessed it, Flamingos. It's quite remarkable, this little piece of greenery and water is surrounded on 3 sides by massive skyscraping buildings. Besides the Flamingos they have some Koi Carp and some other big black things that can grow up to 400lbs in weight or something like that!!! 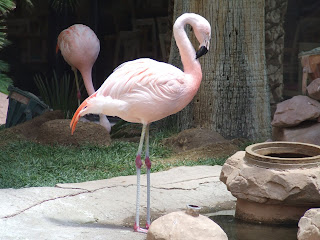 We move on, searching out the next attraction and more importantly the shade. The sun is blisteringly hot. Up to 109F/43C they reckon.

Next stop was Planet Hollywood and the Rainstorm. As usual the attraction is about 1/2 mile walk through all the casino area. As with other hotels, the ceiling is painted like the sky and shops are made to look like old buildings, these seem to be of a Morrocan influence. The Rainstorm itself is pretty disappointing. A few flashes of light on the ceiling accompanied by some bangs of thunder and water falling from the ceiling into a large pool. You'd get more water if you set off the sprinklers! After a few minutes it was over, 2/10.

We made our way back out into the heat and over to the Harley Cafe. This is quite a large diner with a small shop attached, selling t-shirts, etc. The cafe itself has all sorts of Harley/US66 memorabilia/signage on the walls but most spectacular of all it has Harleys hanging from the ceiling in cradles and a moving track, so as you sit and eat, a variety of HDs pass above your head. They have a Fat Boy. I think of David off the trip, there's a picture for him! They also have Captain America (maybe a replica), the chopper ridden by Peter Fonda in the film Easy Rider. I take some pics, then realise it's a pay to have you pic taken with it attraction. A guy comes over but we talk our way out of any possible 'situation' and leave. 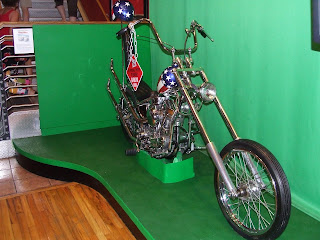 We head for the MGM Grand. They have a lion sanctuary inside the hotel. Across the road is New York, New York, complete with miniature Empire State Building and Statue of Liberty. A roller coaster weaves its way through the buildings and we can hear the screams of the punters on it.

Outside the MGM is a bronze statue of a lion. Not just any old statue but the biggest thing you are ever likely to see in your life. Indeed, it claims to be the biggest bronze statue in the western hemisphere. It is huge, like everything around here. Inside, we find the lion enclosure. There is a glass roofed passageway through the middle. On top, along with a couple of trainers are two lionesses, doing what cats do best, sleeping. There is a little talk telling you about the lions and their enclosure. They have 37 in all but bus two/three in each day from the 'ranch'. 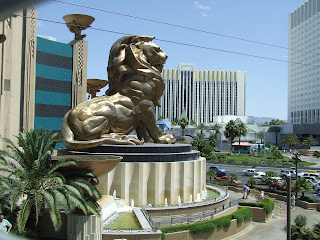 From the MGM we took a wander into New York. No attractions here, so we just had a quick look round. Themes run through most all the hotels it seems, sky painted ceilings and walkways/shops made to look like streets. These, obviously, of New York.

Time was getting on so we started our trek back towards our own hotel, stopping off on the way for a late lunch, Subway once again. We played some more slots, then popped across to McDonalds for a McFlurry. By this time it was time to head back, collect our cases and get changed into travelling clothes. That done, we spent another half hour or so playing the slots before making our way outside for our bus to the airport.

We had already checked in so it was a quick affair to get through the bag drop. Security was pretty much the same as over here, except we had to go the through the x-ray scanner, legs apart and hands above your head. Not so much as a piece of paper in your pockets! That done, shoes and belts, etc, back on we found seats at the gate and got talking to a young Dutch lad about football.  Blow me if whilst we are talking to him, Jimmy Floyd Hasselbaink doesn't walk up to the gate to board our aircraft. We both look at each other. He says is that JFH. I reply I'm sure it is. Cath says she's going to ask for his autograph.

We board the plane and Cath asks the stewardess is she will ask JFH if he minds giving her his autograph. A little while later, the stewardess appears with a 1st class menu, on it is written "To Catherine, Best Wishes" and JFH's signature. Cool!  Not sure what he's doing in Vegas, I guess he hasn't got any TV commitments for the world cup, else he'd be in South Africa.

Flight passes fairly uneventfully and we are at Heathrow about 14:45. By the time we clear customs, get our bags, get the tube and arrive at St Pancras it's about 2 hours later. The 16:58 high speeder gets us into Chatham just after 17:35. We decide to get a cab the short distance to Cath's, to save struggling up hill with the luggage. The driver, unlike the Americans, is less than helpful. Firstly saying he doesn't think he can get the luggage in his Vectra!, then standing and watching whilst I load it all in the back. When we arrive at Cath's I unload everything myself whilst he fumbles about trying to find change of a fiver for the £4.20 charge. In the end, although he has done nothing to earn it Cath tells him to keep the change. The drivers in the States do expect a tip but they do something to deserve it, unlike this t*sser.

We dump the luggage at Cath's, I retrieve my door keys and we then get the bus back to my place. I then drive back down to Cath's to drop her off and collect my luggage.

Back home, my US tour is finally over.

It's been a memorable 3 weeks. I have so many memories from the bike tour AND Vegas that's it's very difficult to pick a particular highlight. There's the excitement of the limo drive to the Harley dealer in Chicago to pick the bike up, the low of the Oklahoma storms, the Wild Hogs diner, baring my arse in the Mojave desert, the sheer scale of the Grand Canyon and the sense of satisfaction at having completed the ride in Santa Monica. In Vegas, the roasting temperatures, the various free shows and the size of the resorts all stand out along with the frustration the crowds caused me.

Would I do it again. The ride, maybe. maybe in reverse. Vegas, possibly but maybe when it's a bit cooler. 45C ain't much fun.

And that's it, the end of my blog. I hope it's been both informative and entertaining. I've tried to give you all a flavour of what I've been experiencing and feeling along the way. Hopefully, it's kept you entertained and not sent you to sleep.

Thanks for following me on this journey. 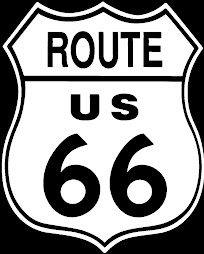 Neill
Almost 60 something fair weather biker, with over 41 years on two wheels and 39 on 4 wheels. Currently riding a BMW K1600 GT SE and driving a Toyota C-HR.